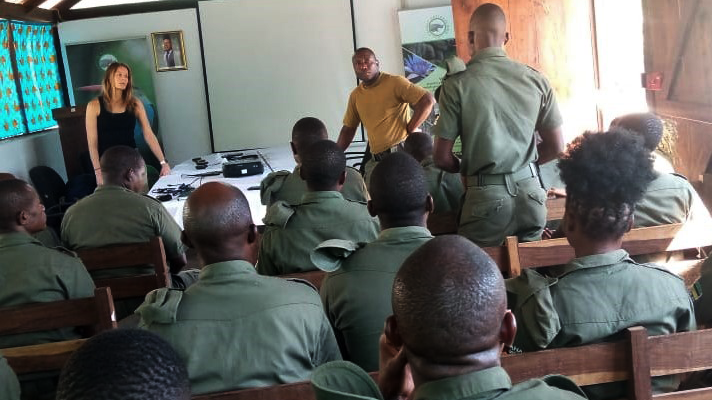 In November, GNAP hosted Cécile Merel, project officer of the Fondation François Sommer, who held a training on the use of the EarthRanger system for all park rangers.
EarthRanger is a mapping system that supports the strategic management of biodiversity conservation in real time.

🔺The training took place at the Musseia Headquarters for 2 days consisting of a presentation part of the EarthRanger system and demonstration on the use of a specific application called CyberTracker on the devices (smartphones), and of a practical part of exercises on the system and simulation of a patrol.
40 rangers were involved, organised into 4 groups of 10 people each for the practical part.
🔺Field exercises consisted of walking to GPS coordinates and then use properly CyberTracker app by entering information observed on a picture simulating a wildlife sighting, an illegal activity or a wildlife mortality sighting.

The training aimed to achieve a more functional way of recording wildlife data 📊and 🔎surveillance in the field, as well as to improve knowledge of animal species (population, sex, reproduction) and their location in the area managed by GNAP, so as to increase the effectiveness of their conservation and the organisation of patrols.

#EarthRanger is a system that allows real time data tracking (collared animal, ranger patrols position, wildlife observation and illegal activities). In addition, the system allows alerts to be sent via e-mail and WhatsApp in real time (depending on the system configuration, when an event like a wildlife mortality report or a geofence break appears). It is hoped that the EarthRanger system can later also be used in the area of human-wildlife conflicts.

🔺CyberTracker app is connected to EarthRanger system, and the app can be used directly from the field thanks to forms that rangers must complete depending on the events encountered. Once connected to an internet connection, the information collected can be synchronized directly and easily giving the possibility to have a real time or day by day wildlife and illegal activities monitoring.

🔺The rangers showed interest in the proposed training, especially the technical questions on how to enter the collected data into the app.
The only minor criticism was the English language of the app, which was remedied with a prompt translation by the organisation. It is planned that EarthRanger will add more languages to the system, including Portuguese.

«Our objective is to collect data field with those smartphones directly during patrol. We gain in efficiency, in processing time, with real-time monitoring and automated geolocation» Cécile Merel